Streets Is Watchin’:
Who Speaks for the ‘hood ?
TRUTH Minista Paul Scott
“We Want in/Or let the revolution begin”
Various Shades of Black-Rakim

There was a time when Rev. Cleophus Johnson, head of the Negro League of Colored Black People ,Inc could call for a march and thousands of people would show up. So, he was confused when his latest call to integrate Big Bubba's Beer and Burger Barn was only answered by a couple of elderly citizens on their way to a Bingo game. Maybe it was because, on the other side of town ,Brother Rasheed was leading a march of thousands against police brutality that he organized on Twitter...
For generations, Black activism went, basically, according to script. The designated leader of 42 million African Americans would spend months organizing a mass demonstration. Every Black radio station in the country would promote this event as it was the ultimate place to be. Then ,after the march, the people would go home , not sure why they came and confused as to what to do next.
But now times have changed and the new face of leadership is anyone who has more that 5,000 Facebook friends and a smart phone.
Historically, since the days of Frederick Douglas, White America has only needed one Black leader to be the voice of all Black people. This was perfected with the coming of Booker T Washington and his Tuskegee Machine, as steps were taken to make sure that his voice was the only one being heard by the masses, whether right or wrong.
But what about now, when the playing field has been, somewhat , leveled, and the high school kid with 10,000 Twitter followers and an itchy typing finger may have more juice than a Civil Rights leader with a prime time TV show?
Years ago, a leader would call for a boycott and “negotiate “ for several weeks before getting a sizable donation to his organization and a photo op with the CEO of the targeted corporation. But now, thanks to 5G iPhones, the battle has already been fought and the war won before the leader can pour his morning coffee
This is most evident with the recent, successful, grassroots efforts against Reebok and Pepsico, as activists led successful campaigns against companies that dared to use rappers with disgusting lyrics to promote their brands. While it is easy to pick up Dr. Winstead Williams and fly him to your corporate headquarters to work out a deal to calm the natives, it ‘s another thing, altogether, when thousands of disgruntled customers are on Twitter plotting a Boston Tea Party styled rebellion and, stealthily, organizing to poor gallons of your product in rivers across the country. Or when thousands of high school kids put the word out on Instagram that anyone wearing your company’s sneakers to school tomorrow runs the risk of having a scarlet L painted on his forehead.
This is problematic for those who hold leadership positions in the Black community because no chosen race spokesman can afford to have people launching successful movements without him being at the front of the line directing traffic.


Although, Eric B and Rakim once said “Follow the Leader,” with the popularity of the Internet , seems like the leaders are the ones doing the following, as there is nothing left for them to do but get down with OPIP (Other People’s Intellectual Property).
I found it strange that after Hip Hop activist, Rosa Clemente used the term “rap industrial complex," during the Rick Ross/Reebok controversy, variations of that phrase started coming out of the mouths of more “mainstream” Black leaders and intellectuals.
So, it seems like the day of the HNIC has just about run it’s course.
The changing dynamic has also proven problematic for the media .


There has always been a serious lack of black journalists in the mainstream media. But today ,even the ones who do make it in front of the camera act more like star truck celebrity groupies than hard nosed reporters. These people will walk right past a group of poor Black folks protesting against indecent housing in order to get the scoop on Puff Daddy’s weekend Black tie affair.
But fortunately, there are people like Scotty Reid whose Internet based , Black Talk Radio Network, is challenging the mis-education of Black media. The network is launching Militant Minded Radio which will serve as a legitimate voice of “the streets.”
However, the first task is that we must redefine what is meant by the term “the streets.”


It was once universally accepted that “the streets” was a term used to voice the collective displeasure of those suffering politically and economically at the hands of a common oppressor. However, in the Hip Hop Era the term have been redefined to mean “a group of mindless zombies , who ‘s collective self identification is based on Wall Street marketing schemes, regardless of economic circumstance.”
If it is true that there are eight million stories in the naked city, then there are 42 million stories in Black America, all of which deserve to be heard. We now have the technology to tell our own stories. he question is, do we have the courage?
We must show the masses of the people who are waiting for someone to come along to lead them to the Promised Land, that the power is right at their fingertips.
Funkmaster George Clinton once said that his legendary group , Parliament's, mission was to “reclaim the pyramids. "
In 2013, our task must be to reclaim the streets.

TRUTH Minista Paul Scott’s website is No Warning Shots Fired.com . He can be reached at info@nowarningshotsfired.com or follow on Twitter @truthminista Militant Minded Radio airs every Tuesday at 9PM EST on the Black Talk Radio Network. http://blacktalkradionetwork.com/page/militantmindedradio 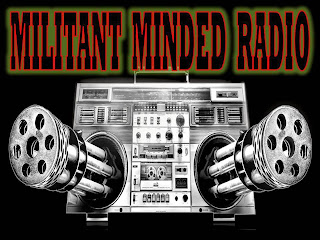 Posted by No Warning Shots Fired.com at 9:08 PM