The Practical Politics of PanHoodism

The Practical Politics of Pan-Hoodism:


Recently, there was a great debate held in Harlem to determine the political destiny of African Americans. On one side, you had people who ,vehemently, argued that only black folks whose ancestors were slaves should be paid reparations in Bitcoins. On the other side, folk countered that our efforts would be better served building a sneaker empire and establishing international trade with Africa.


After arguing for over five hours but failing to reach a consensus ,the participants exited the building, barely noticing the body of a 13 year old girl who had just been killed in a drive-by shooting a few minutes earlier…


Recently, there has been an ongoing debate over the political direction of black people in this country and what our focus should be as we enter the presidential election season. All this happening during a time when Reparations has gained ,well past due ,media attention.

Today , new movements are popping up such as ADOS ( American Descendants Of Slaves) created by social media personalities and Antonio Moore aka Tone Talks and Yvette Carnell and heavily advocated by Tariq Nasheed , the producer of the Hidden Colors documentary series. They are proponents of the idea that our collective focus should be on the affairs of black people in America whose ancestors suffered the horrors of continental US slavery.

While others are true believers of the traditional Pan Africanist approach that we should connect with the Motherland , as espoused by scholars such as Dr. WEB DuBois.


I believe that both ideas have merit and still fall under the Black Nationalism ideology advanced by Martin Delaney and Marcus Garvey. So I am not opposed to either of them.


For me, it’s just a matter of priorities.


As I look at my city , Durham NC and see the young black men being murdered in the streets, not to mention the spiked walls of gentrification that are rapidly closing in on a town formerly known as “Black Wall Street,” I have to ask, how can we bottle the various “solutions” that have presented to African Americans and pour a little out for the homies in the hood?


This is where “Pan Hoodism” comes in.


Pan Hoodism is the idea that your journey to uniting Black people globally does not begin 2,000 miles away , but in the hood down the street in your own city.


As African Americans, we have had no shortage of ideas that are good in theory. What we have lacked is application. How do we use all the black history books we have read, lectures we have attended and YouTube videos that we have binge watched to create a brighter future for the dismal reality in the less affluent black neighborhoods that are in virtually every city in America ?


The problem is that there is nothing glamorous nor sexy about community activism. We are a people who like entertainment and many of us would rather pay $30 and drive 100 miles to hear a Youtube scholar discuss whether the earth is round or flat than to take that money and give out free black history books to the youth in public housing. Not much different than the avid church goer who will plop a $100 bill in a collection plate to hear “Reverend Whoop and Holla” yell about a paradise in the sky while the people outside the doors of the church are living in poverty here on the ground.


Under Pan Hoodism we will use the macro-cosmic black liberation theories and apply them micro-cosmically to our local black communities.


The same strategies that we, theoretically, would use to stop tribal wars in Africa will be used to stop the gang wars in the hood. Also, the economic programs that we would invest overseas, would be diverted to improving the third world type conditions in public housing.

If we don't practice Pan Hoodism in our cities, now, even if we do receive reparations, a whole generation will be wiped out before the first check hits the mailbox.

Ecclesiastes teaches “there is a season for everything and a time for every purpose under Heaven.” In 2019, it is the season to use Pan Hoodism to get black folks out of Hell.


Minister Paul Scott is the founder of Black Messiah Media based in Durham NC. He can be reached at (919) 972-8305. Follow on Twitter @truthminista
Posted by Min. Paul Scott at 3:18 PM

Dirty Dancing With the Developers 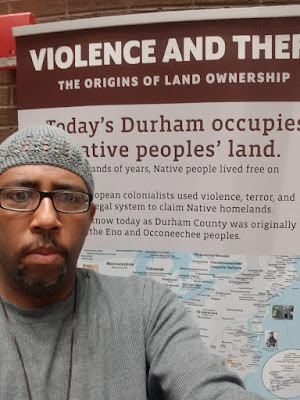 “If you dance with the devil, the devil don't change. The devil changes you..."
Joaquin Phoenix from 8mm

When the owner of Dick Dastardly Development first came to town  he was met with hisses and boos by politicians and their constituents who cried foul at the mere thought of citizens in their
city being displaced. But when he promised to build a much needed, affordable combination golf course and ski lodge in the hood, the boos quickly turned to cheers and he was awarded the key to the city….


One of the most difficult issues facing the Bull City in 2018 is gentrification. After all, who doesn’t want their modest southern town transformed into a more ritzy area like downtown Manhattan. Well, it depends on who you ask, those who stand to make a load of money from the transformation or those who may lose their be- ever -so -humble homes.


The well off and the poor see gentrification through different lenses. As the old saying goes “whether the glass is half empty or half full depends on who’s a-drinkin’ and who’s a-pourin’.”


Even those who, vehemently,  oppose the process have different rationales for doing so. If you are middle class ,displacement means the old oak tree with your childhood sweetheart’s name carved in it might get chopped down. But for the poor, it is the uncertainty of not knowing where your family may end up.


The perception of neighborhood renewal is, also,  packed with historical baggage.


There was a time in this country when the powerful  could “ buy” Manhattan for 24 dollars worth of beads. Or in some cases just outright take whatever they wanted, whenever they wanted it in the name of progress. As much as we hate to admit it, terms like “eminent domain”  and “manifest destiny” are as American as apple pie.


If you come from a wealthy family who have prospered from the American dream , urban renewal just comes with the territory.  But what about the descendant of Africans who had their land stolen by colonizers. Or Native Americans  and Mexican Americans whose ancestors were removed from their soil ? Not to mention that poor white American of Appalachia who’s great grandfather's farm is now a coal mine.

So, whether you see someone as a shrewd  business tycoon or a neo-colonizer is a matter of opinion.

Right now, many Durham citizens, at least in theory, oppose gentrification. Nobody wants to go on record cosigning  somebody’s grandma getting kicked out on the street.  But people are fickle and public outrage is a fleeting moment soon forgotten. Especially, when it’s so easy to catch amnesia when you get hit upside the head with a stack of dollar bills. Or when  some tough guys in dark Ray-Bans  drag  you in a back room and make you an offer you can’t refuse.


Let’s keep it really real.  In a capitalist society, money talks and there is a $6,000 degree of separation between anger and acquiescence.


The guys who come struttin’ in to City Hall meetings with Brooks Brothers suits and penny loafers sleep good at night after donating a couple of grand to an affordable housing fund or to the local schools system.


So, even though I may see developers as ruthless Snidely Whiplash-type villains with black top hats and stringy mustaches who kick puppies when nobody’s  looking, the general public is easily swayed by even the cheesiest PR campaign.


Personally. I’ve always rooted for the underdog and patterned myself after the patron saint of the lost cause,  so excuse me for being more skeptical than the, eternally,  optimistic who believe that all's well that ends well.


Even some Durham leaders seem to believe that ,perhaps, there is a silver lining in this rapidly expanding cloud of doom and despair.


I hate to be a Debbie Downer but there are no happy ending here. Compassionate Capitalism is an oxymoron and someone is gonna be left out in the cold come next winter.


Sometimes there is no middle ground. It’s just the rich once again stickin’ it to the poor.

But you will still have some who are lost  in Dave Mason’s 70’s AM playlist purgatory where “there ain’t no good guys.  There ain’t no bad guys. There’s just you and me and we just disagree.”

If only it was that simple…
Posted by Min. Paul Scott at 6:40 PM

Thank you to Dr. Robinson and NCCU for having me lecture on Hip Hop and Masculinity last week. 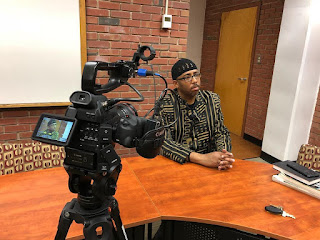 Big shout out to Dr. Rob and Choice FM for having me on last Saturday. 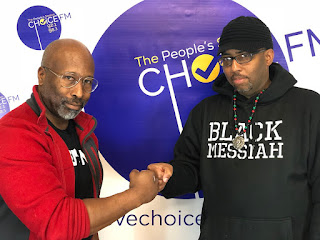 Is Downtown Durham too White ?

Starting March 3rd , my column will run in the Durham Herald Sun every 1st and 3rd Saturday.

Is White Liberal Supremacy a thing?

Check out my latest article in the Herald Sun.